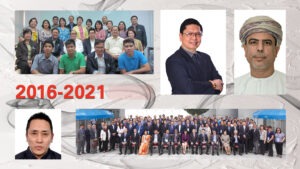 2016
The ADFIAP-Renewables Academy Green Banking Project, a program on green energy and climate finance (Germany), and the EU-funded “Asia Cleantech MSME Financing Network (ACMFN)” project were launched in 2016. The Association won the Asia Best Sustainability Report (SME category) from the Asia Sustainability Reporting Awards (ASRA) for its 2015 Sustainability Report themed, “Creating Stronger Communities.” The World Federation of Development Finance Institutions (WFDFI) designated ADFIAP as its Secretariat, which was the second time, as the first was in 2010, and ADFIAP Secretary General, Octavio B. Peralta, was named WFDFI Secretary General.
Mr. Arjun Fernando, CEO of DFCC Bank, Sri Lanka, succeeded Mr. Pema Tshering as the new ADFIAP Chairman during the 83rd Board Meeting held in Apia, Samoa.

2017
One of the highlights of 2017 was Ambassador Jesus P. Tambunting, a past Chairman of ADFIAP, receiving an honorary OBE (Officer of the Order of the British Empire) Award from Queen Elizabeth. The Association also launched the Global Internship and Leadership (AGILE) Program and spoke at the World Bank and the Central Bank of Malaysia’s 1st Global Symposium on DFIs in Kuala Lumpur (Bank Negara Malaysia).

2018
In 2018, the ADFIAP Finance and Investment Center (AFIC), a service arm of the Association tasked with developing and promoting business cooperation opportunities among members, began operations. ADFIAP also attended the first Council Meeting of the Sustainability Standards and Certification Initiative (SSCI), a trailblazing project aimed at developing and promoting sustainability principles and practices in DFIs in the context of the Industrial Revolution 4.0. ADFIAP, the African Association of DFIs, the European Organization for Sustainable Development (EOSD), and the City of Karlsruhe, Germany, collaborated on the SSCI.
At the 88th Board Meeting in Kyrenia, North Cyprus, Mr. Phub Dorji, CEO of Bhutan Development Bank Limited, succeeded Mr. Shivjee Roy Yadav (BDBL) as Chairman.

2019
ADFIAP and Convergence, a global network for blended finance based in Toronto, signed a memorandum of understanding (MoU) in 2019 to develop, promote, and implement blended finance programs and activities.
The Karlsruhe Declaration on “DFI 4.0,” signed by the African Association of DFIs, the European Organization for Sustainable Development (EOSD), ADFIAP, and the City of Karlsruhe, Germany, ushered development and implementation of programs and activities to help DFIs become more efficient and financially sound.

2020
ADFIAP Secretariat sets the path for 2020
On January 8 and 16, 2020, the ADFIAP Secretariat in Manila held a two-part strategy setting and planning meeting at the ADFIAP Headquarters in Manila, Philippines. The two sessions’ goals were to revisit its purpose, unique value proposition, mission, and vision in order to stay relevant, provide meaningful services to members, and become more efficient as an organization.
Entering an unchartered territory: COVID-19 Pandemic

SARS COVID-19 struck the world in February 2020, forcing ADFIAP’s face-to-face meetings, trainings, and conferences to be canceled. The pandemic was uncharted territory. There was no guide detailing how associations ought to react.

The 43rd ADFIAP Annual Meeting in Ulaanbaatar, Mongolia, scheduled for May 13-15, 2022, has been canceled. For the first time, it was held entirely online in October, with the theme “DFIs and the Pandemic SITUATIONER AND WAY FORWARD “A CONVERSATION AMONG MEMBERS.”

2021
Despite the difficulties and constraints caused by the pandemic, ADFIAP has thrived with the dedication of continuously providing services and assisting its members during these trying times. Rapid technological shift and adaptation on the use of video conferencing technologies allowed ADFIAP to conduct webinars and adapt remote work for its Secretariat.
ADFIAP could have stopped in its tracks, but instead it sought out opportunities to enhance member services and secretariat operations during the pandemic by establishing strategic partnerships with Japan’s Mitsubishi Research Institute (MRI) for Cleaner Energy Future Initiatives (CEFIA) and London Institute for Business and Technology (LIBT).