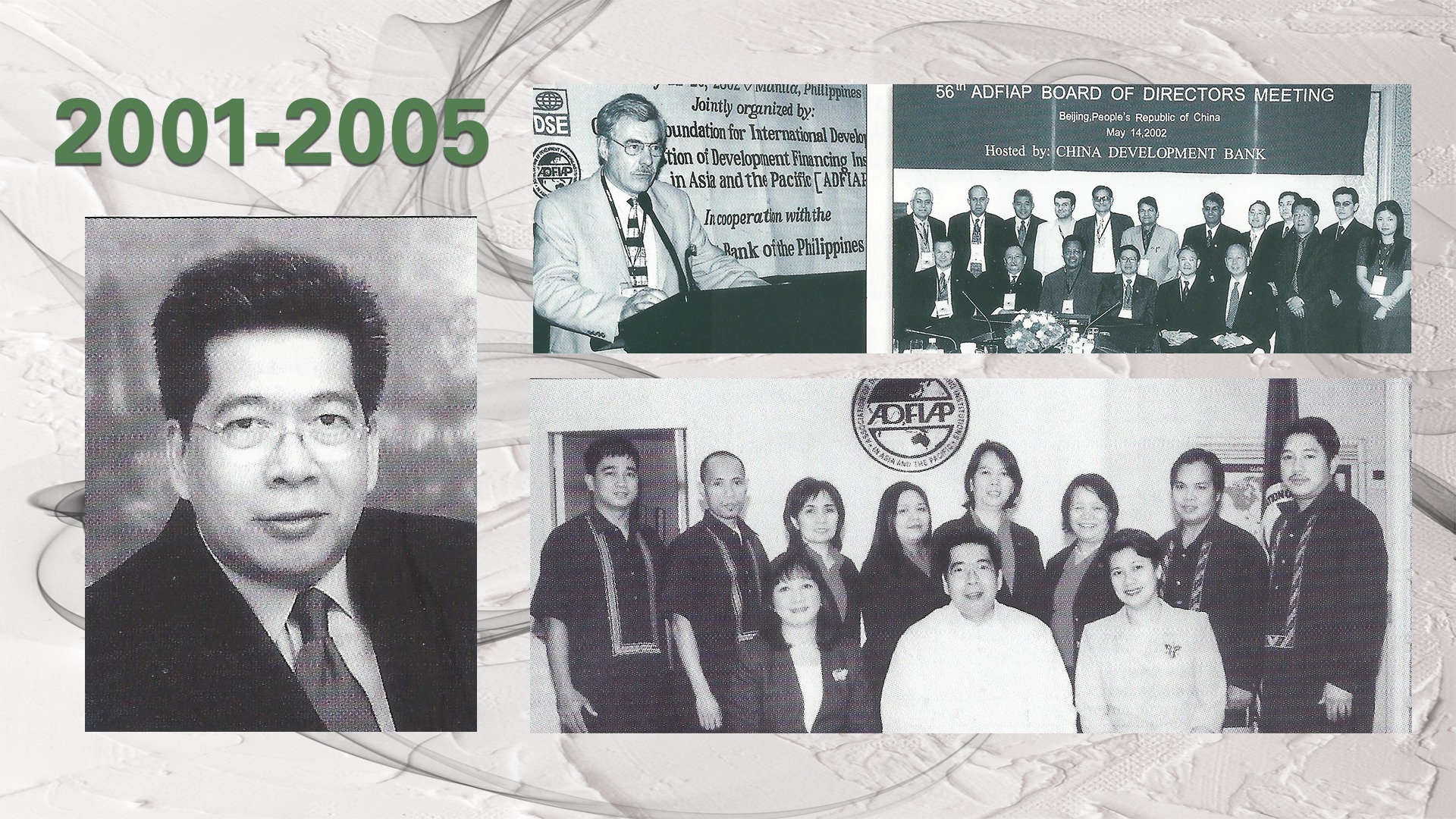 2001
ADFIAP had a new chairman in 2001. Mr. Moksevi Prelis of the DFCC Bank handed over the Association’s chairmanship to Mr. Isoa Kaloumaira of the Fiji Development Bank. The theme of the 24th Annual Meeting, held in Tokyo, Japan, was “The DFIs Relationship with the Government and Market/Risk Management,” and featured the Association’s founding members receiving the 20th Century Achievement Awards.
Also held that year was a seminar on Credit Analysis and Risk Management in Project Finance, which taught participants about credit evaluation, risk analysis, and project financing.

2002
In 2002, ADFIAP, the World Bank Institute, and the Asian Institute of Management’s Center for Development Management collaborated to hold a seminar/workshop for human resource development practitioners, learning institution administrators and managers, and government officials involved in educational policy formulation.
The 5th International Seminar on Strategic Management and Training Marketing aimed to equip participants with the knowledge and skills required to manage their respective training institutions and market their training programs to ensure long-term viability and sustainability.
The 25th Annual Meeting, held in Beijing, China, was titled “Revisiting the Development Banking Philosophy in Asia and the Pacific: A Call for the Times,” and the ADFIAP Development Awards were given to 13 outstanding projects from 11 banks in ten countries during the 56th Board of Directors’ meeting.

2003
Due to SARS wreaking havoc in the first months of the year, ADFIAP had a rocky start in 2003. However, the Association carried out more programs and activities than expected, one of which was the Asia-Pacific Seminar/Workshop on Good Corporate Governance, designed to increase awareness of the international standards of good corporate governance among development financing institutions in Asia and the Pacific. Another was the Enhancing Environmental Governance in Financing Institutions in Asia and the Pacific held in Bangkok, Thailand, and was part of the Association’s “Greening of DFIs” project.
The 26th ADFIAP Annual Meeting held in Ulaanbaatar, Mongolia, was themed, “Critical Issues in Development Banking in the New Environment.” Mr. Isoa also stepped down as Chairman of ADFIAP and handed the position over to Mr. Anothai Techamontrikul of the Industrial Finance Corporation of Thailand.

2005
The Association had a hectic 2005. With funding support from InWEnt (Capacity Building International, Germany), ADFIAP organized two international seminars/workshops on Strategies for Financing Sustainable Development that year.
Mr. Octavio B. Peralta was appointed Secretary General, succeeding Mr. Orlando P. Pea, who had served ADFIAP for 28 years. The Association was also awarded a grant from the European Union’s Asia Environment Governance Standard (EGS) Projects. Small and Medium Enterprises Finance Initiative was also launched (SME FI), and the Board approved the first 5-Year Strategic Plan, with the theme “ADFIAP: Focused and Prepared to Lead,” in 2005.