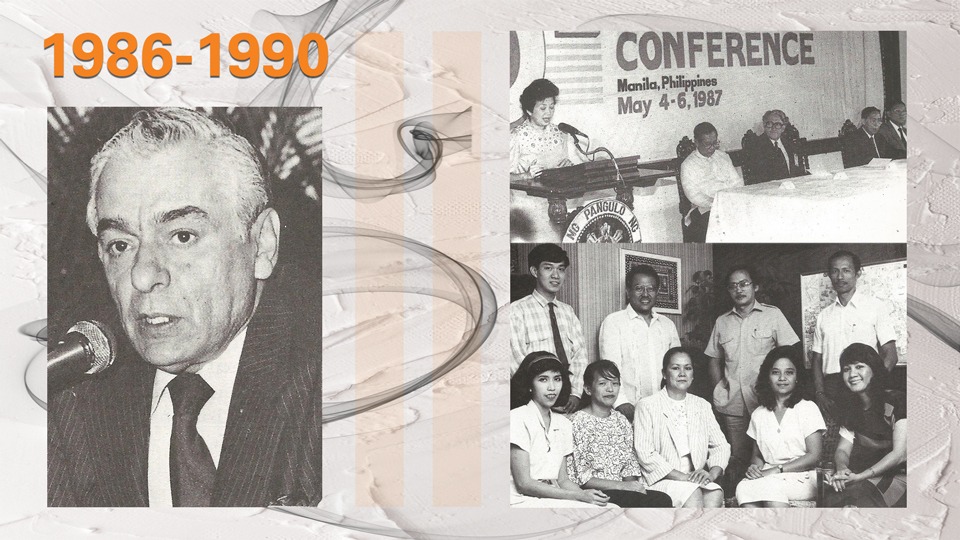 1986
In 1986, 61 delegates from member-DFIs and guests from the World Bank (WB), International Finance Corporation (IFC), and Asian Development Bank (ADB) gathered in Auckland, New Zealand, for the Association’s Ninth Annual Conference. The theme was “DFI Responses to Emerging Imperatives in Development Financing in Asia and the Pacific.”
This year also saw significant changes in ADFIAP’s organization, with Manila designated as the permanent site of the ADFIAP Secretariat and the Secretariat established as an autonomous body under the administration of a Secretary-General and Mr. Orlando P. Peña was appointed as the first Secretary-General of ADFIAP.

1987
The ADFIAP Secretariat was particularly busy in 1987 with several activities, including the 10th Annual Conference in Manila, Philippines. The discussions centered on two critical issues affecting DFI operations: access to capital markets and regional standardization of accounting and auditing practices. The topic of the ADB-sponsored Regional Symposium on Financial Control, Accounting, and Auditing Practices of DFIs in Asia and the Pacific.
By the end of 1987, ADFIAP had 71 members: 49 were Ordinary members, 14 were Associate members, 7 were Special members, and a Cooperating member.

1989
The Bank of Communications (BOC) and the China Development Corporation in Taipei, Taiwan, Republic of China, hosted the 1989 Annual Conference, and the theme was “Agenda for Development Financing in the 1990s.” It addressed issues and challenges in development financing that characterized the 1990s, identifying new business opportunities and emphasizing the importance of being more viable and competitive in the coming decade.
The Secretariat was also hard at work developing a broader Public Information Program to raise awareness of DFIs’ development-related activities and to support members’ information needs for the rest of the 1990s.

1990
The 13th Annual Conference signaled the beginning of the 1990s. The conference’s theme was “DFIs and National Development,” and the keynote speaker was Datuk Seri Sanusi bin Junid, Malaysian Agriculture Minister. The discussion focused on DFI contributions to economic development in their respective countries. The agenda included the promotion of national development through closer cooperation among DFIs, and addressing issues strategically in the 1990s.
Also launched this year was a major regional training program designed to accelerate the development of the regions export industries. The United Nations Development Programme (UNDP) and the Swiss Government, in collaboration with the International Trade Center (ITC) UNCYAD/GATT, jointly sponsored and were the main implementing agencies. ADFIAP played a significant role.